Mogul skiers demand a ski that can accelerate quickly but still swivel and not catch on the side of moguls. Using the same grind we use on many of our SL skis with less depth of cut to allow easier lateral movement but still having a structure to brake suction. 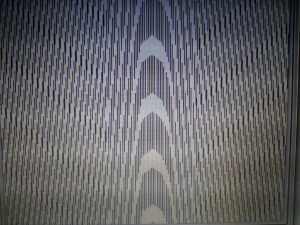 OTHER: all snow conditions for consistency of ski-ability. The lines outside the bow are actually blank with no texture. The computer has trouble rendering this.

If you took a GS course and turned up the gate sides toward each other and left the transition flat, like a captial U, and then removed the snow under the gate so that it would be suspended horizontally in the air, you would have in essence a half pipe run. All the new grinding technology with bows or chevrons has failed to help the pipe skier because these grinds are all developed for skis to travel in one direction. The only true bidirectional grinds are those that are cross or straight liner. We have developed a few grinds from our knowledge of GS racing skis and combined with what we know about spinning and come up with what you see below 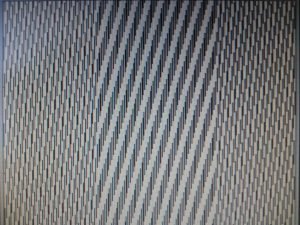 OTHER: A GS grind inside for straight line speed and a finer cross on the outside to brake suction and still allow less rotational drag when entering the pipe. The fine texture on the side helps brake suction on the softer/newer snow across the transition. The outside areas can also be made blank for harder snow or ease of transition from a late spin landing.